The way things are going we may start looking for Noah and his Big Boat.  We have more rain — some of it forecast to be severe — in the forecast for today and tomorrow.  Fulton — just down the river — is expecting flooding later today.  So, with soggy skies we aren’t going very far or doing very much.  We’ve been reading, writing, and attending to small indoor chores.

But the Good News is that I have returned to my last summer’s weight loss mark — I’m back down to 30 lbs beneath my high weight mark sometimes just short of retirement.  During the winter I’d slipped a little and in the last three weeks I’ve managed to get back to my pre-Cudahy weight!  Feelin’ good; lookin’ better; gettin’ as much exercise as feels good and the weather permits (Ain’t no way I’m goin’ out to walk a couple miles in a rain slicker!)

I have only 20 pages remaining in my re-read of The Seventh Commandment by Lawrence Sanders.  That was the one I started last fall and never finished after we returned to Cudahy.  I pretty much started from the beginning being unable to remember much of anything from last October. It’s not his best work, not his best leading character, but I like Sanders’ style, his books are long enough to make them worth while reading — I hate short stories.  With the rain in the forecast I hope to finish that today. 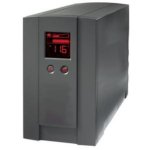 On the Small Space Living front, I’m pondering how better to deal with my power supply issue.  The one drawback to having committed to a short RV is finding ways to cope with how do you live with the storage issues you’ve created.  I am happy with how much we’ve downsized; I’m happy with being able to stow what we have on board — but some things have yet to tell us where they want to live within Journey.  I have been playing around with locations for my backup disks and my server — they are easy — they’re only 8″ x 8″ x 2″ — but this uninterruptible power supply is a bit bigger — 9″ x 15″ x 10″  and it wants to live near the server.  I might end up making a little storage / stowage box for the lot of them and let the server live on top of the UPS — or something — still thinking about that.  Yesterday I had pencil and paper out trying to figure a way to have Home Depot cut all the major cuts I needed for the parts out of a single handi-panel — 24″ x 24″.  That didn’t look like it was going to work.  So, I’m still contemplating.  Of course it’s possible I’ll figure out how to do it and then 2 days after I build it I’ll find just what I want at Bed, Bath, and Beyond in La Crosse or something…. Isn’t that always the way it goes?

I should have baked bread yesterday.  But I was too lazy to go down to the basement (meaning go outside in the rain) to get out my two jars of flour.  I’m terrible; I know.  It’s not like I’ll melt in the rain!

We saw our smallest turtle yet on the road yesterday.  Most of the painted turtles we’ve seen have been 5″ – 9″ in diameter.  Yesterday we saw one that was scarcely as large as a quarter.  One of the students thought he might be a year old hatchling — seeing as it’s too early in the season for them to be hatching yet. But he was a teeny thing.

There are a flock of geese here raising their young and I’m developing a better sense for the expression “silly goose”!  Peg has spent a good while just watching the babies and moms and dads and uncles and aunts meandering around the campground.  We’re accustomed to being hissed at by now.  And we do our best not to intentionally irritate them. That said — it’s still a strange life they lead!  And we’re also appreciating how LONG the hatching season must be — some of this seasons chicks are quite large already with feathers and some are still quite small and dressed in only their baby fluff.  When you live in the city and see maybe ONE robin’s nest and only those chicks it’s not so easy to get the sense of Spring as a season for babies — and not just a singular TIME for babies.  I know that sounds stupid but I never lived on a farm, and never spent much time around baby critters.  The idea that there’s enough time for them to mature for their winter flight South if they are born 2 or 3 months after the earliest broods just never crossed my mind.

Well, there you have it for today.

Tomorrow — Wednesday — is moving day.  Not sure if I’ll write in the morning, or after we make the move — a lot depends on what the skies look like when I wake up.  Talk to you then.

Right now all we’re getting is rain, since last evening.  Our high for tomorrow is only 34, so we could be getting the same things that the folks up in Wabasha MN are getting.  Snow.  Cold, fluffy, snow.  They’re looking for an accumulation of 6″-10″, right now we aren’t looking for any — and that’s the report of the weather service.  If I had my way we’d never get any more but than I am winter-phobic.

It seems early for snow closings, but I guess it isn’t.  This year I dont have as much on my mind as I usually do, so maybe it just SEEMS sooner.

Yet, life doesn’t stop and there are things to be done — in spite of the fact that I didn’t get many of them done TODAY! I’ve not been sleeping well; too many things on my mind I guess.  So last night I took some Tylenol PM.  I really oppose meds not specifically prescribed by my physician but after enough nights of poor sleep it’s time to do something about it.  The reason I comment on it is that whenever I take the stuff the next day I’m good for nothing.  It’s like my brain is on vacation.

So, when I looked in the corner where my desk sits and mentally tried to map out an alternative placement in the room we live in I had a (not so) bright idea (as it turns out).  I thought moving the desk to a different placement might work better.  But alas the desk is not an easy thing to move, and it is oversized making the move even more difficult. This desk was here when we moved in.  It’s 72 x 39 and all steel except for the writing surface which is something akin to linoleum I suspect — softer than ideal for a desktop because it indents quite easily with the shape of anything heavy laid upon it.

The two of us dragged the thing 20 feet.  We positioned it in various angles, alignments, and configurations (there being computer, graphic tablet, four hard drives, uninterruptible power source and desk lamp all involved.  No matter what we did, nothing fit right.  So, guess what…. We moved all that junk back to where it came from.  None the happier.  We talked over other places to put it.  We talked over other places to put our bed.  I packaged up a couple things that were cluttering the room.  But in the end, I’m right back where I started — still not awake.

Oh well….  Every day doesn’t have to see great progress.  I guess in this case, some days are just for relaxing.