Yesterday we made that little trip to Bandon.  I would be remiss if I failed to show that I am gradually embracing our local environment.

I get a lot of questions from volunteers about Tsunami safety.  It turns out that the only areas that have Tsunami Evacuation Plans are incorporated areas with some form of municipal government.  And if there’s no government there’s no one to do the studies and come up with a plan for the population’s safety — I guess because it’s generally assumed that there IS NO population.  Some of our volunteers fall into the cracks between the plans.

That said, there’s always a plan: 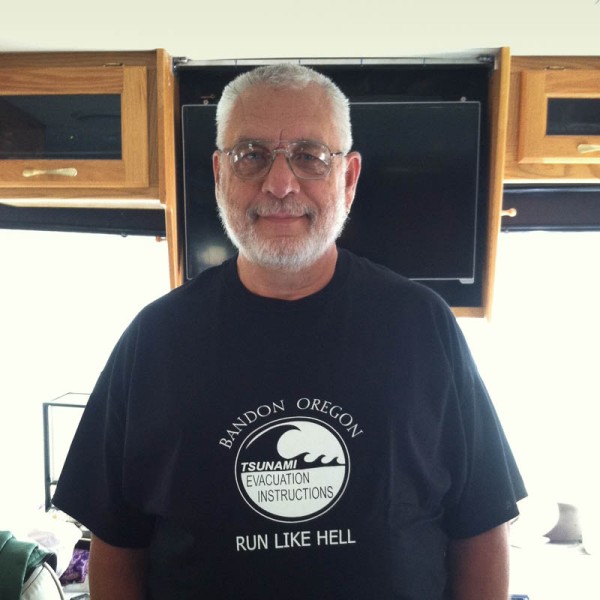 Today being a Sunday  I decided that I was going to just chill.  That may sound like a simple thing, but I’m a guy who doesn’t chill very often.  There are family members who might say I don’t chill at all, but I beg to differ with them.  I just do it MY way.

While hanging out on the patio with a Campari and water we talked a little about boondocking, and about solar and about plans for the future.  Now that the temps are a little more reliably ‘warm’ we’ve finally started sitting out; and talking.  Call us wimps, but what’s the fun of sitting out in a lawn chair in your jacket.  Inside the RV with the windows cracked open we can still hear the critters and birds, we can still smell the glory of the forest.  But it’s been nice enough in recent weeks to enjoy being out there.

During the conversation I was thinking about some of the places we stopped on our way westward; about the scenes, the formations, and nature’s grand scale of things:  basically, about timing.

Being human, we so often ‘judge’ what we see around us by our own standards, but our own standards are puny and relatively short-sighted.  And I can be among the worst because I’m incredibly impatient.

When we see something that is ‘new’ to us, it’s easy to assume that it really is ‘new.’  But a lot of the time we find that what is new to us has been going on for aeons, or generations and we just need to readjust our perspective.

There will be a “Big One” — a catastrophic earthquake.  There will be catastrophic Tsunamis — bigger than the ones that have threatened the NW coast in the past.   Mount St. Helens will erupt once again.  As will the Yellowstone volcano — and when it does the United States will never again be the same — the world will change when it happens.

Preparing for an event, and living through an event, are experiences unto themselves; completely different experiences.   I tend to spend a lot of time preparing. I’m not sure I know how do do things differently.  Planning is part of the fun. WE are in search of a more unscripted life and our discussions about solar energy are part of that pursuit.  We have a lot to learn about the subject and we’ll get a quick course on Wednesday.  But we may be 4 months away from the install — depending on several situations shaping up at the moment.  So, all we’re doing now is brainstorming. 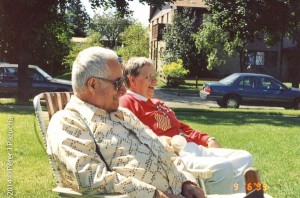 My dad and mom — this was after she came down with Uterine Cancer and about 2 years before she passed.

As we were sitting there talking Peg looked at me and said that when we sit outside like that it reminds her of my parents who did so quite often.  They were a good example to us of collaborative marriage.  There were many opinions of who ‘ran’ our family but none of them were very accurate because no one other than Peg and I got to see the two of them in their natural surroundings as we did.

We’ve always done a lot of sitting in the yard, here’s my parents, with Kathryn (on the left) and Peggy in between Kathryn and my parents

I may be whacko but I think that one of the old and rare things in our society today is people who know each other well who are able to just sit and talk openly, without guards, without posturing.  This idea that you can know someone well enough to just be yourself is wonderful; but in a world where trust seems to have become such a crucial issue it’s rare and infrequent for people to be able to do what just comes naturally after 45 years together.  The fact that something seems rare can be deceptive.  The universe is huge and unusual and rare things happen every day!