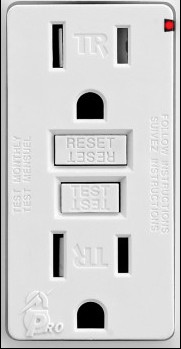 Yesterday was Fridge changeover day. Aside from waiting around for spare hands to show up the changeover went smoothly and it was also a good father-in-law / son-in-law bonding time. I like Mike a lot, and I’m pretty sure he likes me too rather than tolerating me.

During the day I had the genset running — it had been a little longer than my usual 30 days for it’s ‘exercise’ so I was running the heat pump and a couple space heaters just to put some load on the generator.  It was warm enough outside that we didn’t really need heat, but the generator needs a load for the exercise period to do what it’s supposed to do — which is get all the bits and bobs lubricated and seals resealed, and fluids moved around.

Thus, when we pulled up jacks and retracted slides I didn’t think much about moving — just went through our normal checklist and go…

A typical GFCI (Ground Fault Circuit detector). Note the little red LED in the upper corner, and the TEST and RESET buttons at the center.

When we arrived back at the State Fair RV Park I went through my usual arrival routine and when I went to deploy the satellite dish nothing happened. I checked the usual culprits when there’s a power problem and nothing helped.  We had no power in any of the outlets in the coach.  Yet, we had power to the heating system, to the refrigerator — basically to all the areas that had their own circuit breakers.

Our usual checklist for power problems goes like this:

In the past that’s as far as we have gone.

There are also disconnect switches in the battery and inverter bays but I would never turn them off except for servicing the batteries or the inverter so they exist but aren’t something I’d normally think about.

What we never think about is the single Ground Fault Circuit Detector installed in the bathroom!   And low and behold, when we looked at that we saw it:  the other dreaded red light!  For whatever reason in all the messing about in the coach yesterday we had done something to trip the detector (or perhaps we inadvertently pushed the test button)  — at any rate the detector did it’s job — if shorted out the circuit so that none of the outlets had power to them.

All we had to do was push in on the reset button and all our outlets came live again and the problem was no more.

So, now we have a new checklist for power problems:

It is recommended that you test your GCFI monthly.  To be honest I don’t know anyone who does that.  That kind of negligence may not be good, but I dare say it’s not uncommon.  If I had been doing the monthly checks I might have thought about the possibility sooner.  As it was the sun had gone down, it was dark outside and I had decided to ignore the problem until the morning when I could see what I was doing outside.  We went to one of our favorite pizza joints and it was after we returned home satiated and relaxed that the CGFI came to mind. 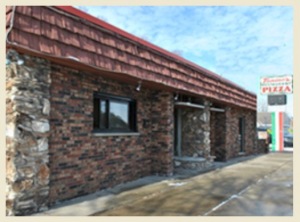 Tannin’s Restaurant and Bar — a nice selection of Italian specialties and pizza in a neighborhood bar atmosphere. There is a separate dining room — so you don’t have to eat in the bar.

I supposed the lesson behind that is, when in doubt or in trouble, the best thing to do is to go get a pizza. Our new ‘favorite’ pizza in town is Tanino’s on 76th Street in West Allis.  I hate to admit that they have edged out Balestrieri’s on 68th which was our staple for 30 years.  The reason for the change is — primarily — changes at Balestrieri’s.  The crust isn’t quite the same, and the deep fried eggplant strips often arrive too soggy — having been fried at temps too low for the item.

Having said that, I have to comment that change and consistency are two of the things we have noticed most during this longer than usual return to Milwaukee.  In our lifetime we have never been the sort to go to the same restos all that frequently.  When we were living in town we might revisit the same place only 2 or 3 times in a year if it was one that we liked. 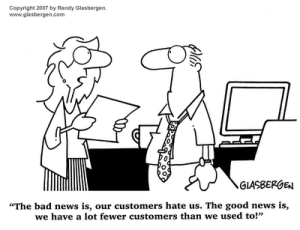 This visit we returned so some places that many times or more because we have come to appreciate that they have stuck with their formula and still offer what we had come to expect from them over the years.  And what we have (sadly) discovered is that it’s hard to find places that do maintain what made them popular or famous in the first place.  I don’t say this with sadness or disappointment — it’s merely a fact of life.  A fact that will alter our plans on successive returns.  I say that because once a place disappoints us more than once we tend not to return — end of story.

There you have it, the tale of the Other Dread Red Light…

Thanks for stopping by, and I’ll talk with you tomorrow.

Well, not ME exactly.  My Heart Interface.  Which is brand-name speak for the power inverter control panel in Journey.  I’m wondering if any readers might have an idea the cause.  We’re planning on getting her in for service but some advance troubleshooting might be helpful.

2:38PM  — UPDATE
Our good friend Delbert suggested that the problem might be condensation caused by cold storage all winter and puttering around in it with out the heat on.  She’s plugged into shore power and I turned on a heater aimed at the control panel area.  Also turned on two of the ceiling fans to exhaust some of the stale air.  After a couple hours the quantity of blinking lights seems to have reduced by 1/3 so Del might have hit the nail on the head.  As we weren’t having any issues with the Heart Interface before storage in October this sounds like a reasonable “failure.”  I’m keeping it heated and we’ll see what happens by tomorrow afternoon.

It’s been suggested by 2 RV service advisors that it might be low voltage in the house batteries.  We ran the Genset for a couple hours and now we have her plugged into shore power.  And the digital charge meter (a separate panel) shows 14 volts, which would indicate the house batteries are charged.

We haven’t disconnected any of the batteries over winter — so it isn’t a case where we RE-CONNECTED anything to the wrong terminal. The batteries are 18 months old.

Any suggestions will be appreciated.  Not sure if we can get her in for service this coming week (we have other jobs to be done while she’s in the shop — so that will happen whether or not we figure out what’s up. 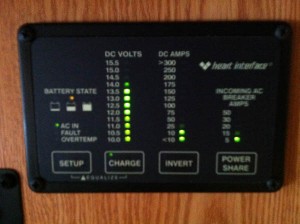