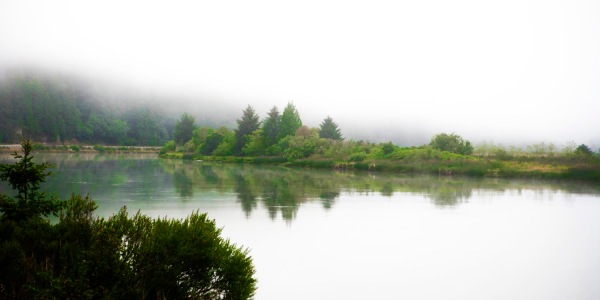 This tree toppled over some many years ago but that doesn’t stop Momma Nature….  Another of the shots from the July 15 fog.

Friday was a good day to make it a short day and get out into the Real World.
I was supposed to visit the two terminated hosts and pick up their Forest Service gear.  But considering that they will both be here through the weekend I figured it didn’t need doing right then.  So, I did a little filing, made a few phone calls chatted with Boss’ boss’ boss about our volunteer meeting on Wednesday.  He seemed particularly pleased with the way the meeting went and it’s nice to  have a happy boss.

Waves at the mouth of the Umpqua River!

Peg had stayed home to do the laundry, but as it turned out after a restless night for her she took a nap in the morning and the laundry will get done another day.  So we hoped in the car to get out and see some more of the countryside seeing as the sun had come out and the temps were in the low 50’s.

The Umpqua mouth often seems to be turbulent.

We’ve been looking for a road that would take us to Siltcoos lake.  Recently I saw a road named County Line road, so we thought we’d try that one out. (without having looked it up on Google.

So, a few miles down the road we turned onto the so identified road and after about 50 feet came screeching (well, not literally) to a halt.  It turns out that County Line road after the first bend to the right there is no road:  just a metal gate and what looks like a horse patch.  Ok.  What’d plan B? 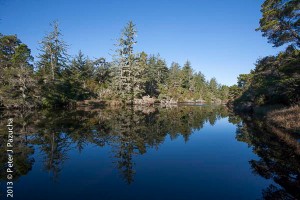 A view of Elbow Lake

Another from Elbow Lake. One of the intriguing aspects of this lake is that the water is almost always dead still and beautifully reflective!

We decided to take a ride up Oregon 38 — it runs along the Umpqua River.  We found ourselves in a little fog — you just never know where that will happen.  It can be sunny one minute with little or no clouds in the sky and all of a sudden the sky is gone and there’s fog.

Cows feeding in the valley — and one watching ME!

They (ODOT) are working on a tunnel down the road so it’s closed for four nights each week — Given the sparsity of roads I really wonder how locals plan for some of the road closings around here.  Oregon does have ODOT information venues but I did not notice that closing on any of them.  We weren’t inconvenienced but a vacationing traveler might very well have been.

Such a lovely, lush, green valley! (and it’s only February)

Route 38 runs along the Umpqua River — a much larger river than the Siuslaw which empties into the ocean at Florence.  The Umpqua passes through Reedsport — about 1/4 mile from   the Dunes Area Visitor’s Center.

A pano of the Umpqua Valley

About 4 miles East of Reedsport is an Elk viewing area — we’ve been there before and didn’t stop today.  But we continued along the valley just enjoying the rich farmland and the fog.   I’ve said it a few times already but I just don’t get tired of the fog here.  In Milwaukee when we got fog it always seemed to be SO foggy that you could barely get anything done.  Here there is much more frequent fog but it has thus far rarely been as dense.  The result is more eeriness, and more peekaboo trees, and glimpses into the unknown.

Again we found the sheep to be as numerous as cows, or mores.  Once again — there aren’t a lot of sheep raised in Wisconsin and the change is nice to see:  little white critters grazing in a field instead of big bovines.  I don’t know — it’s just ‘nice.’

We’ll get out some more as spring takes hold.  There aren’t many roads here but they surely do hug along edge of the valley slope, rarely abrupt walls.  Following the terrain as they do they often twist  and turn their way up in elevation.  With flat bottoms most of these valleys  seem ripe for spring flooding. We saw enough evidence of that today, the valley bottoms were soggy to be sure and most of the cows (there were some dairy and some beef farms) were being kept indoors for their safety and well being.  I’m thinking that cows may not be smart enough to stay out of the mud.

I liked that last shot a lot.  I took it on the way INTO work this morning.  The river was incredibly still.  After the last week and a half of almost constant rain the water had nearly returned to it’s normal blue aspect — rather than the rain muddied brown of recent days.  Another surprising thing to me has been that for all of the high winds that we get — the lakes and rivers often seem to be so calm — almost mirror smooth.

Ok — that’s it for today.  Thanks for stopping by, I’ll talk with you tomorrow. 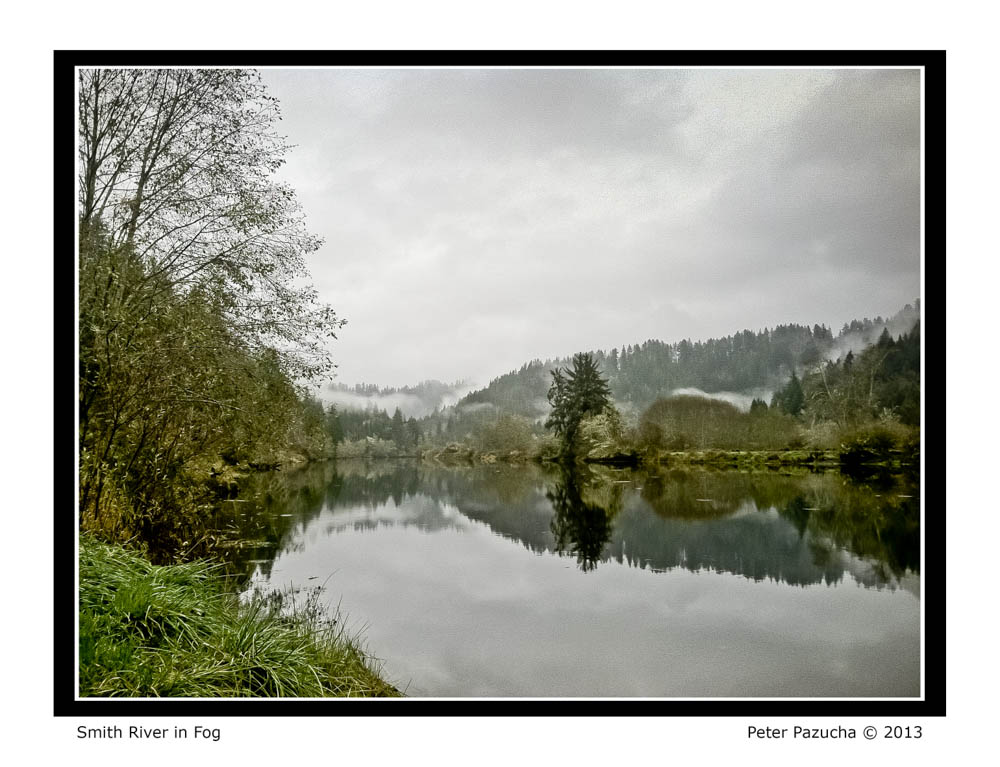 Siuslaw kind of inherited this area along the Smith River that had been sort of donated to the government.  Sort of means that the owner wanted something from the Forest Service and in exchange for their cooperation for a set number of years the owner was willing to donate a plot of land right on the river.   I don’t understand all the hidden agendas involved, but the set time (10 years) have expired…  Our boss said this was our area of responsibility but that we didn’t need to stop very often;  it’s out of the way and other facilities have higher priority.

Being off the beaten track it’s the scene of pot shots at the signs, messy toilets and overgrown vegetation — no one wants to spend much time here… But it is so gorgeous!  I like it a lot.

We’ve been stopping here once a week on Sundays.  I guess that counts as ‘not too often’.  Sundays are among our lightest workload days and there isn’t much traffic at the time we arrive — it’s our first stop of a Sunday morning. That also means we see the river at it’s calmest, with the sun relatively low — often with fog in the air. 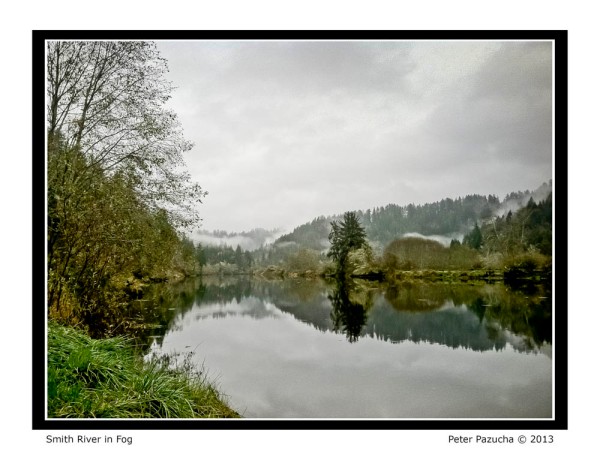 I’m sure we’ll stop off from time to time and have more images to share from this idyllic spot.  I can’t help it — I love it.

But then that’s why we ended up here in the first place.  I just love this corner of OR.

I’m particularly curious to see how it changes through the seasons — and not knowing about the weather here, whether we will get foggy Winter, Spring, and Summer mornings.  { Obviously we know we  get foggy Autumn mornings. 🙂 }

Some of the deciduous trees in this area are heavily layered in moss.  Because we arrived mid autumn we cannot tell whether the moss hangs on LIVE or DEAD trees.  I’m hoping they are alive…. the scene will be amazing with new leaves and moss, and with mature leaves and moss.  But only time will tell.

I’ve been surprised not seeing any fishermen here.

There ARE a lot of fishermen on the river; just not here.  Is there a reason other than inconvenience for the fishermen? Maybe we’ll find out some day. Not being a worm-drown-er I wouldn’t know about that.  But we’ll be watching the river.

Thanks for stopping bye.  I’ll talk with you tomorrow!

This time of year, warm weather means fog.  And we have fog!

Michael’s due back here today to start on the TV remodel.  I suspect today will just be about measuring and getting the old TV’s OUT of the RV.  No easy task to me — he thinks it’ll be duck soup.

When I took the iPhone shot of the fog I noticed that Peg had the coffee mugs out on the radiator to warm.  There’s a history behind those mugs.

My first ever post-marriage job was doing my alternate service for the Draft Board at a hospital in Chicago.  It was an interesting time in life.  I didn’t make dirt for wages and living in Chicago has always been expensive.  We had so little money that we went to the shopping center in the heat of summer because we didn’t have air conditioning and our tiny South Side cottage was a tar-paper shack that got sweltering during the summer.

I worked at what was then called Chicago Wesley Memorial Hospital — now part of the Northwestern University Hospital medical center near Superior St. and Michigan Avenue. I worked in the Stores Department at first — delivering medical supplies to patient stations.  Not very exciting, but safer than dodging bullets in Vietnam and 100% legal.

While there I collected one of their mugs — the one on the left.  Later when Peg was working at St Luke’s Hospital (before it got taken over by Aurora Health Care) we acquired a couple more — almost identical mugs except for the paint job.  That mug on the left has been with me for almost 44 years now.  I’m not sure what I’ll do when it finally gets dropped or broken — I might even cry (not).

All of which I share because it’s funny the things that we invest emotional baggage into.  It’s a silly mug, not expensive, doesn’t hold much , doesn’t fit my hand particularly well, and yet neither Peg nor I gave any consideration to getting rid of it when we downsized.  It just never occurred to us.  We use it most every weekday morning; on the weekends we break out larger “weekend” mugs. These silly things are just part of our routine.

The narrow form radiator in the kitchen is a great way to warm up the coffee cups …  Too bad not many people even HAVE radiators nowadays.