The sportsmen aren’t happy.  Momma Nature’s not playing fair it would seem.  The rivers are too low.

I’ve been commenting on how little rain we’ve been getting and there has been a lot of comment among locals about how much we need the rain.

One of the areas in which local concern is being felt is the spawning runs of Steelhead Trout — which aren’t occurring because the water levels in the rivers are too low: too low for them to navigate the channels and get to where they need to go.  Like salmon (members of the same fishy-family: salmonids) Steelhead return to their birth area to spawn.  Steelhead are actually anadromous (sea-run) forms of the Rainbow Trout, meaning they spend part of their life in salt-water, returning to fresh water to spawn.

But — that’s as far as this non-fisherperson is going on the fishy-bits… My thinking is more along the lines of rainfall.  We need the rain.  Without the rain the rivers run dry and without ample water in the rivers we can’t sing our favorite childhood song:

Fishy, fishy, in the Brook,
Papa catch ’em by the hook,
Momma fry ’em in the pan,
Baby eat ’em like a man.

Ok — enough of THAT nonsense…

How to get a rise out of volunteers…

The other evening I was messing around with volunteer.gov.  I was at home in Journey and I logged into the website to try making heads or tails out of the back end of the website.  We’ve got about 40 different adverts — most are turned off right now — but with about 40 adverts almost all of them share three primary titles and there’ no easy way that I’ve found so far to tell one from the other without opening the listing and finding the tag that identifies which campground or day use area it refers to and then closing it again.

I have the ability to change the name of the advert, so I started doing that on a couple that I know we will need to fill this spring.  And the next thing I know I have a volunteer on the phone asking questions.  WoW — Instant reaction!

It seems there’s a volunteer I have been trying to tie down about joining the family here and I have had an initial contact with them but without reference to any specific campground. They’re interested but don’t know where they want to serve.  It turns out that renaming that one advert and turning it on — overnight — got their attention and now they are sure that’s the one they want.

Methinks I’m going to change all those names so that I can find them — and maybe volunteers will be able to find them better then too!  Hot Diggedy!

Our Forest Service Law Enforcement personnel do the mandatory background checks for us.  The only problem is that they spend very little time in the office and most of their time out in the field.  When Peg and I were applying we happened to luck out.  The former Volunteer Coordinator got us cleared in one day, but during the conversation he said, “…but sometimes it’s a couple weeks before I even see them [law enforcement].” 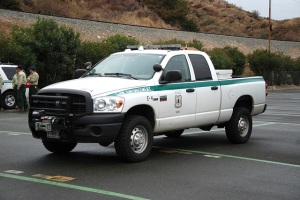 So, I’m wondering what I can do to whittle that time lag down.  I need to find the crew chief (I have no idea his rank — I know he’s under the Captain of the Watch — because I KNOW that guy) and find out how this can be handled efficiently.

I’m hoping this is department that is a little more consistent to navigate than some of the other departments.  My lifelong expectation:  more organization than I ever find.

Out of the Woods

And on the “Surprise, Surprise” side….

I was walking out of the visitors’ center yesterday after spending the morning out in the field and I saw one of our roving caretakers in the parking lot talking with a guy I didn’t recognize.  It turns out I’d written him an email because I found an old application saying he might be interested in volunteering in 2014.

His situation has changed, but instead of being a volunteer-site resident volunteer he might just turn out to be a pop-over-a-couple-days-a-week volunteer.  He is moving to Winchester Bay — just 10 miles South of the office and he might be available to help us out on a regular, periodic basis.  So, that’s good.

Lately, I feel like I want to eat everything in sight. We’ve been taking lunches to the office and by the time we finish for the day at 2 or 3 I’m famished.  So last night we stopped at the post office to pick up two packages there — my prescription drug mailing and an order from Amazon — and then we decided to check out another of the local Chinese restos in Florence.   Chen’s Family Dish has had good reviews from people we know, so we did and we were quite happy with the results.

A couple weeks ago we had gone to the Chinese place in Reedsport, called Ocean Garden.  The menu at Chen’s looks different than Ocean Garden but line for line it’s the same menu.  And the same food — except for the crap puffs which were sort of stale tasting.  However, they have really good Hot and Sour Soup!!!!  And they are reasonably priced.  The ambience is very similar, and pleasant.  So I’m sure we’ll try them again from time to time.   Good Eatin’!!!

Shower mold can be a problem in many locations in the US.  Oregon is one place where it’s almost ubiquitous, and I’ve been looking for a good solution to commercial Tilex or those other daily sprays.  I found this recipe a while ago and we’ve been using it regularly ever since.  Now that I’m satisfied it works I wanted to share it.

The alcohol will evaporate off over time, so make this a small batch at a time.

I like it.  It does a good job as a wetting agent so that water doesn’t stay on the walls, the peroxide deals with the mold and it’s a nice product to use.  Without lots of chemical names on the label.

One of the volunteers I work with is a really dear guy who makes no bones about his problems with PTSD.  I’ve never had much to do with those who suffer with it and something happened today that really woke me up.

You know we are trying to replace ourselves in our old position here on the Forest.  This guy has been hear about the same length of time and he works in a different part of the complex.  After talking with other volunteers about how long they have been volunteering on their current post and after thinking about the effects of longevity on our volunteers I thought maybe this guy might prefer to be at a different location even though he hasn’t been here a long time.  Peg and I got the choice of locations when we signed on and he didn’t. He got what was left over.

So, when he called today about something quite different I asked him — in passing — whether he would be interested in coming up where we were and switching jobs.  We have our own little complex, he’s parked in the middle of one of the campgrounds.  We take all our equipment home each night and leave everything on board the truck and trailer; he has to unload his truck every night and doesn’t have access to a trailer.  I thought I was being a nice guy.

We talked a few minutes and hung up.

About a quarter hour later the phone rang and he was on the other end.  Kind of sheepishly he asked was I asking for any particular reason?  Turns out after hanging up his doubts and fears kicked in and he was worried that someone had complained about the job he was doing, or that I was upset about his performance.

We talked for quite a while to assure  him nothing was wrong, and to go over why I thought it might be something he might actually enjoy.  In the end I think everything is copisetic.  I’m pretty sure we came to a meeting of the mind but it just served as a good reminder of what many of our Men in Uniform have given up in their service for this country and for us.

I think the two of us have moved to a different plane in our relationship.  I hope that I don’t accidentally trip a trigger in the future but I’m human and chances are I will.  However, after today I think we know each other well enough to know we can talk through just about anything.

How would you feel if someone told you after a year on the job that they were doing their job wrong? That happened to me today.  I don’t think the person even realized what they were saying, but there you have it.

I got them sorted;  explained what should be done and how and drove away in a sort of daze.  I know that our section of the forest might not excel in training — goodness knows I’ve been confused enough during the last couple months.  But I don’t get going a year before asking someone how a thing is to be done when it’s supposed to part of their daily routine.  < scratch, scratch, scratch >

Question Me An Answer

In the meantime I have been asking a LOT of questions.  And I discovered today an odd curiosity about fee collections.

While we were out visiting hosts today two of our stops were sites about 2 miles apart.  At one of them the volunteer told me that the collections officer had just been there.  An hour or so later I stopped at the second location to be told that no one had been around to empty out the Iron Ranger for the better part of a week.

How can that be?  I said to myself.  Did one volunteer just miss the collections officer?

When we returned to the office I sought out the head of fee collection and started asking questions and what I learned was interesting and it pointed out to me that a ‘system’ isn’t always what it appears to be.

The fee department is responsible for all the fees paid into the recreation are.  There are certifications required for a staffer to be allow to make collections and those certifications do not apply to all fee tubes in all locations — they are divided by the nature of the location.  In our area we have Off Highway Areas, and we have Campgrounds, and we have Day Use Areas.  It turns out that the Off Highway enforcement officer collects fees at OHV areas, but not at any other areas.  Two months ago the staff that held the same position were collecting at all of the fee tubes.

And yet the volunteers here see a very different set of circumstances.  To them it appears that ‘that other department’ isn’t doing their job.  What they fail to understand is that there multiple qualifications required to do different jobs.  Whether or not I understand the reasoning for the different certifications doesn’t really matter.  Like any bureaucratic system reason and rationality don’t necessarily walk hand in hand.  There had to have been reasons for those differing certifications.  I suspect that those reason have something to do with past accidents, past injuries, past robberies — but I’m sure that there isn’t even anyone on the Forest here who knows that history.  They only know the rules as they stand at present.

So, I have another thing to explain.  I think I need a newsletter…