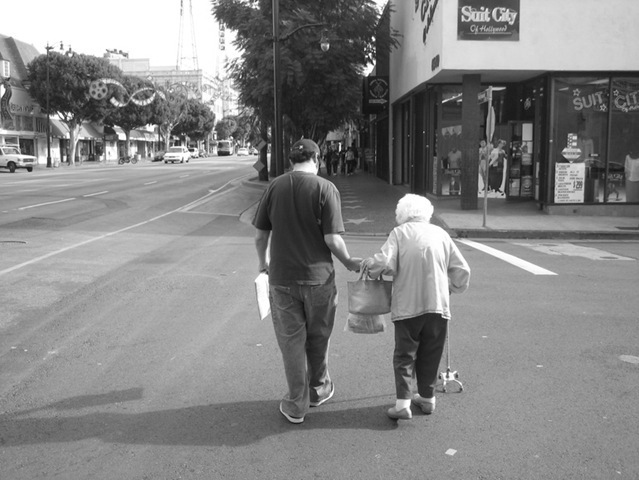 I watched two people cross the street today.  Peg & I were leaving the local mall to which we had gone for our morning walk.  The people crossing the street were attempting to reach the kitty-corner side of two four lane streets with signal lights.  With a median, and one of the two being an aged woman it took a complete light cycle for them to get to the median strip.  It would have taken another to finish crossing the first street, and two more cycles to finally reach their destination kitty-corner from where they started.  I don’t know where they were going, but it was going to be a journey of considerable difficulty for the oldest of them. 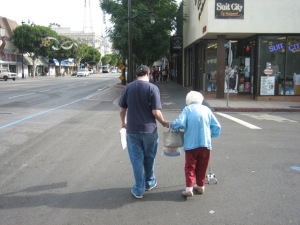 While Peg’s dad was still alive we cringed at the thought that we might some day have to take dad’s car keys away from him.  As it was, his girlfriend of 20+ years was already nagging him about his driving and while he wasn’t entirely on top of his game neither Peg nor I felt it was right — at that time — to disable his car and take away his keys.  Fortunately, for this particular situation, he passed before we were faced with the ugly necessity.

So, also with my dad. He was a guy who loved to drive — I’m sure some of my DNA is imprinted with his love of travel.  But the last couple years of his life we made it a point to take Sunday drives with him — to give him a chance to see the world passing by in the car window, and with that little concession to his personality he was happy most of the time to let me do all the driving around town too.

The U.S. is not a friendly place for people without cars.

When Peg & I were looking for a place to live here in the Milwaukee area we talked a lot about finding a home that would be near goods and services, my specialists offices and hospital, and a bus stop.  We succeeded.  The bus stop is only 100 feet from our front door and although connections aren’t great we could get anywhere we need to in the city if we had to.

I can’t help but think about the difference though.  What it’s like to have a car, and to not have a car.  The ease of movement which I take so much for granted evaporates in the absence of an automobile.  I find it hard to imagine life as a poor person with no transportation, relying solely upon public transportation.

Public transportation here isn’t bad.  Early in our married life we lived in Toledo, Ohio. That’s a town with what had been a poor public transport system, and it has only gotten worse with closed businesses and declining public revenue funding for the transport system.  Here we have service well into the evening, and early in the A.M.  There the buses primarily run on a spoke system that requires riding all the way into town and back out again on a route that goes near your final destination making some times 4 or 5 times as long by bus as by car.  And the system closes down for night so early that even some office workers can’t use it.

I wonder why we think so little about public transportation?  Our trains are a sad imitation of the regularity and frequency of transport in, for example, Europe.  But, in our large, expansive nation, where we treasure our individuality so much we have created a nightmare for ourselves.  And as yet we don’t realize what we have done to ourselves.

I don’t look forward to the day I can no longer drive.  This post came to mind because after our recent move from the second floor to the first floor that meant that we also needed to change our address with the Department of Motor Vehicles.  And whilst doing that I noticed that our drivers licenses which expire every 10 years will come due for renewal in 2026.  All of which got me to thinking about the fragility of our lifestyle and the possible changes ahead.

I expect no local changes.  I hope by the time 2026 rolls around my eyes will still be good, and my reflexes and brain still functioning well for my age.  Of course no one knows about the future.  But I do know that I look at things like people crossing the street differently now that I’m in my 70’s.

6 thoughts on “Crossing the Street”