Last week before we took our trip Katie came round driving a candy-apple red Mazda that I thought to myself was sure to attract the attention of every speed cop in the U.S. of A. — and later that evening they decided that wasn’t the car for them.  Seems it had been stolen, and well…. there was a long CARFAX history that did not bode well for the longevity of the vehicle.

Then we left town and thought not much more about it.  Until yesterday when we heard that they’d located a car they thought was right for them and they would be picking it up last night.

Well, here it is.

It’s a cute little Mini Cooper and they love it.  I’ll admit it’s not a car I would have chosen, but I don’t have to drive it.  And they are both at a point in time in their lives that I think a fun little car like this will serve them well for a few years. 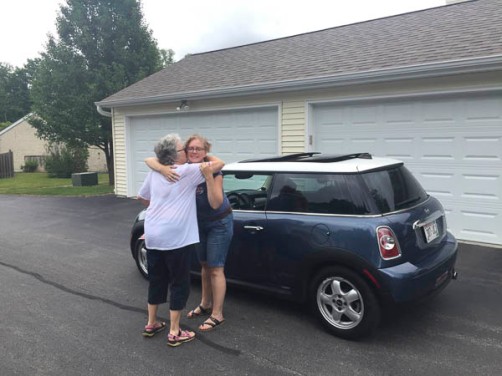 I’m excited for them!   Why not have something fun to drive?  And as long as you’re aware that it’s a lighter car, which during the snow months might handle a little differently then for goodness sake:  go for it.

Being of the age that I remember the old Pacer commercial about “Hey Toots, Where’s the Rest of your car?”

I have to admit that when I came out to look at the car I was put in mind of that advertising line once again.  Still, they’ll have a blast and I’m all for them having a good time.

I don’t know about other parents, but I enjoy seeing our daughter go through all the changes in life.  Some of them are familiar because we went through them ourselves.  Other changes are “similar” in that we had other experiences and we can see parallels in our lives even if the details are quite different.  Most importantly though is to see them facing life’s challenges and adjusting to them and growing — instead of getting old and rigid and breaking under the strain.

I can’t even begin to count the number of different personalities Katie has been.  But I’m thankful for each one.  You can’t stop life, and the most successful folks are those who adjust to life’s change and carry on with living.