What’s up with that?

This quotation is something I should have realized a quarter century or more ago.  I really don’t need all this stuff. (Except maybe my ‘puters.)  Even the minimal version of our stuff that we drag along in Serendipity. We don’t really need all the stuff that remains.  There’s more we could simplify.  All it will take is some dry days in the summer sun when I can set that stuff in the basement out in the open and give it a good looking over.  I know without question that we have some duplicates of things; we have other possessions we haven’t used in the 5 years we’ve been RV’ing — I just don’t realize they are there.  I need to see them!

It’s fitting that this post follows on yesterday’s post about litter picking.  But I’d like to know how it is that I developed a passion for keeping man-made bits off the ground.

Those who make the most litter are usually families with kids — but you know — I love to have the kids here and I don’t mind even the messiest of kids.

That’s thebest time in life — when you’re care free and learning everything in the world and kids are supposed to make messes. So, I don’t mind picking up after them a little.  I don’t have to do it for 18 years. 🙂  It’s a volunteer gig — it will last as long as it lasts and then it will be over. I don’t mind a little litter picking.

Each accumulated bucket of trash that I pick up it seems a metaphor for all the stuff we accumulate through life.  Like those Hershey’s Kiss wrappers that we are forever picking up alongside the fire pits.  They get crumbled up and tossed.  A thoughtless, meaningless act for the camper; but for me it’s a repetitious reminder of all our possessions that we throw around, eventually discarding them only to get more “stuff” than we really need.  We could fit into a smaller RV if I would take the effort to dispose of more of our belongings.  We really don’t need as much as we have — even now.  Granted, the biggest reason we have the coach we do is to be comfortable when inside — to have a little escape room, a little breathing space, a little room to stretch.  So I don’t see us ever downsizing our traveling home — just the stuff we carry along with us.

now matter how simple, or disorganized ones’ life may be, keeping a sense of humor about it all is helpful.

The paradox, it seems to me, is that the more we have, the less we believe we are able to divest.  When we owned our last house — all 6500 sq ft of it — we had rooms filled with objects I hadn’t used, or even looked at since we moved into the building 7 years earlier.  Moving into our first RV — Journey — being much smaller than this — seemed a real challenge but even when we were fully moved in we still had storage space down below.  Now, in Serendipity we have more room to move about and more storage space down below — and I fully intend to free up even more.

The process of simplification is quite amazing.  I find that the more we simplify the easier it is to carry the process further. Before we left our house, heck, before we started the whole downing process it all seemed quite impossible.  We’d lived with so much clutter for so long that emotionally we weren’t willing to believe we could live with that we intellectually knew was quite easy. Even now, we forget about staying simple and acquire more items — that only need to be disposed of all over again. There are times I say to myself, “why did I do that, or buy that”  Living simple it’s addictive.  Or it can be. But it does take regular thought and a little discipline. Maybe it’s just my personality.  Maybe I’m an addictive personality?

I have another three months here to sort downsize a little more.  I know there is “stuff” that we’ve carried around in the basement of the coach for 2 full years now without ever touching it.  I can do better than that. Before we leave Milwaukee in early October I want to be able to say I met the challenge. 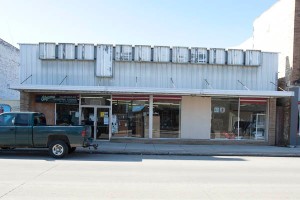 I lived here for about 2 years in the very early 1950’s. The sign up front used to say, JP’s Lakeside Hardware.

When I was about 2 years old my parents bought a hardware store in Algoma Wisconsin.  We lived there for a couple years but they found that the new Polish couple in a Danish town weren’t quite as welcome as they thought they might be; the locals were more willing to drive to another town with store owned by another Dane than to give their hard earned farm dollars to the new folks in town. The family’s decision was to move the whole hardware store from Algoma to Milwaukee.

When Peg & I sold off our possessions in an estate sale before going full time, I came across items that had travelled with us, moving from house to house, … yup… for the better part of 60 years. And not just stuff from the store; stuff from other places and other family members.

We needed to simplify.  For sure.  I’m glad we did, and the decision to go full timing was one of the best in our life — if nothing else we rid ourselves of 60 years of ghosts and leftovers!

How we actually did it still seems impossible to me.  Yet, having downsized, I feel as if the downsizing mentality is stuck in my blood. I don’t want to stop.  Even when I think about the eventuality of coming off the road as RV’ers and returning to some more normal life, it’s always an abbreviated version of home that I see in my mind’s eye.  So, if I allow myself to be a little obsessive about picking up every little shiny speck, don’t mind me.  I’m just exorcising demons that have followed me my entire life.  And enjoying every minute of the process.

Thanks for stopping and why not stop by tomorrow to chat?

7 thoughts on “The Paradox of Neatness”