You’re right there.  No matter what.  Whatever’s going on, you’re right there!  A good size storm flew over last night — lasting most of the night and I kept waking up to the sound of rain on the leaves outside.  Hard.  Soft. Solo drips.  Harmonious patter. It was too dark out there to see anything but life in an RV always puts you front and center with whatever’s going on outside. 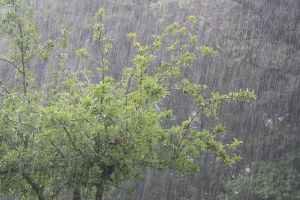 Sounds are ever present.  RV life is always just barely removed from the outdoors… And for some of us that is wonderful.

On Friday it rained all afternoon — about the time most of our campers would normally be arriving.  That meant that we were either sitting in the cool underneath our awning, or hopping in and out of the coach to greet campers in the rain/drizzle/downpour.  Which is fine.  I love the sound of the rain, and I don’t mind getting a little wet from time to time.  And you still meet the most interesting people.  The couple from Alaska who had only ever stayed at one CORPS park before last night were a highlight; such a spry and interesting couple of pickup-truck campers!  That’s a long trip with just a pickup-truck camper!  We had two campers who were making their inaugural trip in a new-to-them camper.  A bunch of campers were regular returnees.  It was a soggy but interesting evening.

But I stray from my purpose….

A few hours later as I lay abed listening to the rain I was reflecting on just how exposed to the elements life becomes in an RV.  I know I have mentioned this before.  If I’m boring any of you I’m sorry.  But that immediacy may be my single biggest joy attending this lifestyle.  It’s like since we’ve been full timing I feel everything a little more strongly,  I react a little more enthusiastically, I find greater joy in almost everything — even the health mishaps and the equipment malfunctions.

One of our ‘favorite’ british comedies on public television is the long running show about a group of old geezers in the Yorkshire Dales known as The Last of the Summer Wine.

We don’t have a gatehouse here.  When folks arrive we notice them through the windscreen and depending on their approach we decide whether to greet them or not.  A goodly number of campers know the routine, know to got to their campsite — and how it’s marked.  Some don’t and they make more of a point of STOPPING at the stop sign and looking lost — which gives me a few moments to make it outside and help out.  Such a small campground really doesn’t need a fancy gatehouse.  The system that we have works well enough unless you’re a newby to the campground and have no idea where you’re going — which is our reason for being here. It’s an informal campground and a friendly campground.

Peg was commenting on how often visitors exchange names at the outset of any conversation.  Being lifelong Milwaukeeans that’s a real change for us. A nice change, but a real change nevertheless. We’re friendly, but in the ebb and flow of life we aren’t accustomed to first naming everyone. It’s nice.  It’s wonderful, actually.

It’s been a busy time for the CORPS staff here lately.  Until this week they had responsibility for hosting Lock & Dam tours at the St. Anthony Falls on the Mississippi River — some 60 or 70 miles from Spring Valley.  Recently the National Park Service decided that they would like to host the tours and there has been a lot of transitional responsibility as well as legal paperwork involved with who owns what, and who will be responsible for what — so the lads here have been chasing back and forth for the better part of the month getting all the details sorted.  That job now being done they are hoping to give more attention to their own duties — for which I’ll be glad.  We’ve been on our own a lot this past month.

They still do tours.  Lots of groups come for dam tours, and Thursday they had some 200 school kids in the recreation area — it DOES get a lot of use.  And there’s a big 150th Anniversary Celebration for the Corps of Engineers coming in June — a big public picnic I’m lead to understand.  So, there’s a lot of prep work going on for that.  We may not see the rangers much until July…. who knows.

Thanks for stopping.  Step outside and enjoy the fresh air.  Peg & I are big on the hours of daylight and as we approach the longest days of the year we’re doing out best to enjoy each and every minute of light!  Why not stop by tomorrow though, and chat.  I’ll be here.