This was not a humorous “Man Bites Dog” story! Fortunately it ended reasonably well. 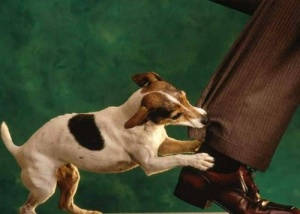 It was well into the evening on Thursday when our friends Chuck & Judy came to our door.  We met them a few weeks ago, they are regular mid-week campers here, and they are a hoot. Normally, anyway…

Surprised?  You bet he was surprised.  And I can understand why.  A few years ago Peg & I were just walking down the street in Milwaukee and a passing German Shepherd decided to nip through my denims and bite me.  It all happened in an instant and neither one of us any idea why that should have happened.  Chuck felt the same way.  He wasn’t making eye contact with the dog, wasn’t doing anything provocative that he could tell, all he knew is that the dog came up behind him and bit him.

The dog owner had been cleaning their window screens and the dogs were off lead.  That’s no excuse.  The rules here are clear that dogs are to be ON LEAD a 6′ at all times.  I’m sure that through the summer we’ll be making more precautionary comments to arriving campers about pets — just to make sure the rules are clearly understood. After all — we are not to be enforcers, just informers.

We spent the next while on the radio dealing with CORPS personnel and the local police.  In the end everything resolved itself easily enough, and we all went to bed when it was done glad for no further complications.

Most campers know that they are obliged to keep their dogs on lead when camping.  I’m not sure whether every dog owner travels with their dog’s immunization records — it’s a good idea to have your proof of vaccinations with you just in case something like this happens.

A few campers get testy about keeping their dogs on a lead — we do hear all sorts of stories about people’s dogs; about how well they are trained, and all the good things they can do.  But fact of the matter is that if you make exceptions for one camper the rest will expect the same exceptions and there are a lot of dogs that aren’t anywhere as well trained as their owners would like to think.

There you go.  Another happy day in paradise. 😀😀 The weekend is upon us and more campers are arriving today. We aren’t full this weekend, but close to it.  Thanks for stopping by and why not stop by tomorrow to chat.