How many walk-ins can you get in one day?  Typically for us that’s only one or two.

It’s funny that even when we have somewhat of a routine, still, every day is different. Most weeks our longest days are Friday, Saturday and Sunday.  After a three day holiday we add in an extra busy day — the following Monday.  And Memorial Day weekend was such a weekend.

This weekend the Monday night “after” the weekend was busier than normal.  With 6 walk-ins, every time I sat down to relax someone else was driving in the gate.  Don’t misunderstand — I say it that way but it’s not like we were inconvenienced — I enjoy the interactions and I’m almost never in a hurry to draw an interaction to a close — if people want to talk — I let them.  It’s amazing the things you learn when you let people talk.

The change to a 24 hour advance reservation continues to raise questions and cause changes in behavior.  Everyone is pretty understanding of the change — but then I think most people realize we are volunteers — and we don’t make the policy so complaining to us isn’t going to make any change.

In the same way that I say, there’s not right way to RV, it also seems there’s no such thing as the perfect RV site.  I love the way campers all have their preferences for their ideal sites.  Some love shade, others avoid it (though if you’re here at Highland Ridge you’d better like shade because there aren’t any sunny spots).  Listening to campers tell you about what they’re doing, and what they’re looking for in a site just amazes me.  So many people like the exact opposite of what we like.  I LOVE IT!  There really is room for all sorts in this world.

I don’t know how you find it when you start talking with strangers, but I find that more often than not, other people want to hear the sound of their own voice; so it’s not hard to get people to tell you their life’s story (if you want to hear it — or even if you don’t want to hear it).  It’s easy to learn about their family’s, their homes, their jobs, where they’re going and how they’re going to get there. 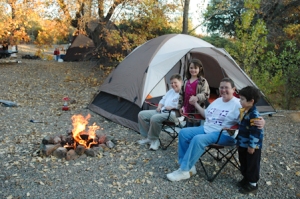 In other settings being that open might not always be such a good thing.  If you were really concerned about your security it might be prudent to be a bit tight-lipped about all those details but one thing about campers is that even the ones who come from big cities seem to let down their defenses when they get out in the woods. And to be honest — after 5 years on the road I don’t really see any reason to behave any differently.  I have yet to hear another camper or RV’er complain about having been ripped off as a result of being too open to other campers — or having been robbed, or … well, whatever.

I suppose part of the openness is due to the average age of RV’ers. A lot of us grew up in happier times, in friendlier times, in more honest & trustworthy times.  We grew up with company’s who valued their employees enough to take a loss to keep good employees even when times were bad.  We grew up with employees who valued their jobs to look out for the boss’ best interest and to put in an honest day’s work for a day’s pay. Many of us lived in homes to which we never owned a key for the locks, and never locked the doors.  Those life-long values don’t change just because one retires.  And they are reflected in everything one says and does.

Another thing I’m really enjoying this year is the number of folks using the kids playground.  All the weekend family campers have been putting our remodeled playground to good use and it’s not just kids over there — having been sent by the adults to get rid of them.  I’m happy to see parents in the playground along with the kids — helping them, talking to them, encouraging them — while the little ones play.  It’s easy as a parent to seek a little respite from the little ones — but so many of the parents we’ve seen here are right in there with their children:  enjoying their youth, and maybe reliving a little of their own.  It makes a person feel good about the state of family around here.  The adults may be career people during the week — but come camping time they are investing in those kids the way they deserve to be invested in.

I was surprised to hear that our group of 11 campers in what we call The Electric Loop took their kids over to the beach and the kids actually got in the water over the holiday.

They were so excited about going swimming that the little ones even got into a tussle about who was going to get which colored Swim Noodles!  I guess blue is not the color of the year — at least not among that group!

In an era where everyone has hand sanitizer I was tickled to see that among the same group there were little ones who were getting “properly” dirty — I mean grimy faces, arms, leaves in hair — you name it.  The kids were finding snails and all manner of creepy crawlies — they even brought them over to us as we made our rounds in the campground — happy and proud to show their findings!  It brought back memories of my own wandering up and down little creeks and making ‘boats’ out of wooden paint paddles to float up and down the creek.  I’m glad that every parent isn’t super paranoid about a little dirt.  I really think that part of the way our bodies develop antibodies to disease is by being exposed to a variety of dangerous things in small quantities — exactly what happens when kids go exploring and getting dirty.

Anyway… our walk-ins are having fun and it’s time for me to make another trip through the campground while Peggy finishes up the laundry.  I’ll be here tomorrow, why to stop by and chat?

6 thoughts on “One Nighters”