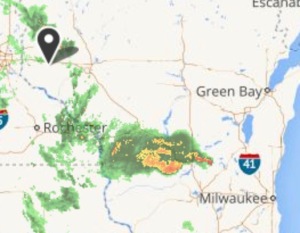 This morning’s weather radar — and what Kathryn get’s to drive around/through on her way here.

Staying in the moment is a deceptive place to be!  Just because one perceives their environment doesn’t mean their perception is accurate!  It’s rather the same difference as is found between an opinion and truth.  Just because one has an opinion about something does not make that either a fact, or the truth. (And yes — I’m still one of those dinosaurs that believes there is and can be such things as absolute truths.)

Like most of the parents I know, when our family is traveling we’re always a bit on edge; always waiting for that “Arrived Safe” from whomever the traveler might be.  Today, there are some sizable weather cells betwixt Kathryn and us, so we’re understandably eager to have her through them and into the good weather.  (If indeed there turns out to be any good weather this weekend.)

After her early morning “I’m Leaving” message I checked the rain numbers for our area.  (doncha just love text messages from your kids — no matter what age they are!) We normally get about 3.5” of rain in May and this year we’ve had… WHAT? …  Only 1.34”?????

How can that be?

That’s the thing about living in the moment.  You are left with impressions of the moment — impressions that aren’t always accurate. I know that as an RV’er impressions are often the only thing I have to report as we aren’t in many of the  places we visit long enough to assimilate truths about them — what we experience are isolated points in time aside from context and ignorant of trends.

When in school I never liked history. But I wasn’t out-in-the-world for very long before I began realizing that history is a lot more important than I ever gave it credence for being. I found myself boning up on history and trying to put my own life into some sort of context;  context I discovered is a lot more important than the smart-aleck young guy living in my body wanted to acknowledge.

I don’t know if it’s possible to travel without adopting some inaccuracies about the places you visit.  I know that for us, we can only take away the memories we experience of a place.  Our recent winter in Florida might have been during a cooler and wetter season — but we can’t walk away saying how WARM it had been — because for us it wasn’t that way.

There is a part of me that knows the United States that I remember growing up in, and working in, is a lot better than this United States that seems to have emerged during the current election cycle.  Frankly, I’m embarrassed by the candidates on both sides.  I keep asking myself, “where did these people come from, and are there no better options out there?”  The predominant trait for the front-runners is not what they stand for, but how strong are their disapproval ratings.  That’s a terrible thing to have happen.

It seems as if in the current climate the entire election process is about $$$$$$$.  And I can’t see any way that the Average Joe can do anything to change that.  Politicians themselves aren’t going to suddenly decide to throw away the feeding trough that has made them all pigs and gluttons for more.  So, how we get ourselves out of this current situation is quite beside me.

Just the other day I was thinking about how down to earth a lot of the young adults we meet are.  There really are a lot of decent, thoughtful folks out there.  And then I turn on the news and after about 30 seconds I want to turn it back off because the stories that reach the media are such trash.  I find myself needing context.  I find that listening to the evening news is quite like listening to the pitter patter of rain on the RV roof:  it often sounds much worse than it is; it often seems to last much longer than it does.

Currently I’m reading a book by Julian Fellowes — the same guy who wrote the screenplays for Downton Abbey. In this book which encompasses past and present from the 1960’s to now he comments on how friendship has changed.  It’s a change that I have thought about myself numerous times because along with the technological changes in the world, the way we see other humans has changed as well.

“This is a distinction lost on the modern world where
people who have shaken hands and nodded a greeting
will tell you they ‘know’ each other.  Sometimes they
will go further and assert, without any more to go on,
that so-and-so is‘a friend of mine.’   If it should suit
the other party they will endorse this fiction and,
in that endorsement, sort of make it true.
When it is not true.   Forty years ago we were,
I think, more aware of the degree of a relationship.”

As we travel around we make a lot of acquaintances, and a very few friends.  In fact, during my lifetime I’d say I had a handful of real friends, and a myriad of acquaintances. The thing is, no one want to be an acquaintance.  Everyone wants to think they are friends.  But I’ve never been willing to commit myself to all that many people at once.   It’s hard work to be a friend.

But, back to the thing about perceptions…

Perceptions as regards friends and acquaintances follow the same paths as other perceptions.  A moment’s attention gives you a data point that applies to a moment.  There are no trends,  there are no averages. In that moment of experience you may fully experience all that a person reveals to you of themself; but you’ll only experience all that such a person reveals to you in that moment.  There’s no way to know more about them short of spending … duh … more moments with them.

I’m not sure I want to spend many more moments getting to know either Hillary or Donald.  To be honest, I don’t think either of them would be good for the United States of America.  Similarly,  I don’t know much about the climate here in Highland Ridge — I’ve experienced a grand total of several summer months of it, but whether they are typical or not I don’t really know.  I’ve tried a few restaurants; but I don’t know if they are really good restaurants, or if we were just there on a good night.

I’m happy for this part of my retirement to be a constant flow of temporary experiences.  I’m happy — for a time — to approximate a life without context.  I know that will end at some point.  My need for context will eventually overcome my need for novelty.

All my life I’ve used the the illustration of a matrix to describe how I live my life.  Life is a giant grid and people, places, things, experiences, relationship all fit into that grid in some way.  When I don’t know the coordinates I put those items off on the side until I figure out where they belong.  Then the fit into the matrix and I can… sort of… forget about them:  I know where they fit.

Perhaps that’s partly the reason we haven’t found a “place” that we want to call our retirement home.  Thus far the places we’ve been have been only points in time.  And perhaps I’m jus figuring out right now what I’ve been looking for.  I’m not sure.

Anyway… perceptions are not reality… they are point in time data points that tell us about the moment, but not about what to expect.  I wish I knew what to expect from this election.  I DO know what to expect from Peggy, and from Kathryn, and Michael and Melanie, and many of my close friends.  I also know that I’ll never be able to count on any politician — not on Donald, neither on Hillary — or even Bernie.

So, on this Friday before Memorial Day weekend there you have it.  The reality that Presidents send young men and women into battle — often for reasons more their own, than reasons of the nation.  And I’ll do my own grieving for those lost.

And I’ll be here tomorrow,  to chat if you will.  Why not stop and spend some time?