The fridge is installed. Our only remaining pre-departure event before we leave Milwaukee is delivery of my meds.  So, we used Thursday to catch up with yet another longtime friend. She lived in our own neighborhood so we not only caught up on each other’s lives but we also dished about the neighborhood’s reaction to our departure.

Before going mobile we had worked to get a zoning change for our school building and did not succeed in our attempt.  The neighborhood objections to our plans were increased vehicle traffic and commotion in what is otherwise a quiet residential neighborhood.  It turns out that the new owners are doing a lot of work on the property.  I’m ‘afraid’ that the neighborhood is getting a lot more traffic with him there than ever would have been the case had they granted us the deviation.  He has a LOT of motorcycle friends who park there at all hours of the day and night, I know we heard stories from him about wanting to work on motorcycles and vehicles.  There are also rumors about who he is and what he does. (Of course no one is going to go up and ask him — we know he has a decent job working for the Milwaukee Metro Sewerage District as a testing technician)  But that’s the funny / sad thing about rumors.  They are rarely true.  But at present his actions are only fueling the neighbors worst fears.  It it wasn’t for the hard time the neighbors gave us when we wanted to do something good for the neighborhood I might feel badly — as it is it’s a bit humorous that their worst fears are becoming reality.

We laughed our heads off while reminiscing.  It’s always good to laugh.

The finish for the new storage unit is dry now.  Last night the outside temps held about about 40º, so we opened the ceiling vent, turned on the fan and exhausted the fumes while we slept.  Mike had finished the storage unit during the day and it was dry to the touch but not ‘dry dry’.  Those new water based finishes are wonderful in how quickly they dry and they are way less stinky than the old high V.O.C. stuff.  We’re able to use the storage now and it’s a nice addition 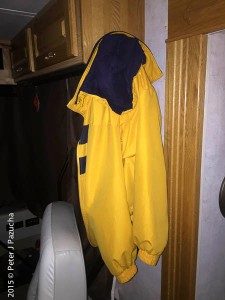 PLUS… we used to have a problem remembering to take the coats off the hangers at the end of the lounge slides when we retracted them to move — so the new storage bay will give us a place to hang coats where they won’t be in the way when we retrace the slides.  I find that the more we can do to mistake-proof the RV the better off we are!

While I’m getting ready to head South, Peg is happily wrapping Christmas presents to be left behind on our departure.  We each have our ‘things’ to do.  And keeping busy hands makes these last couple days of waiting pass more quickly. 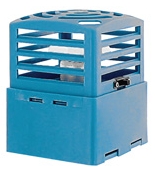 Then there was the issue of air circulation in the Norcold.  With no circulating fan it’s common for RV’ers to put battery operated fans in the fridge to keep the cold air moving.  Those little buggers won’t run more than 1 month on 2 “D” cells, and remembering to change them was always a nuisance. 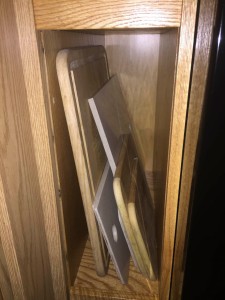 The new storage unit lets me get all of our cutting boards and the sink toppers out of the way.  I am SO happy about such a simple little benefit.  There’s such limited counter space in any RV, and being able to free up a couple sq ft of what there is makes a big difference.

All of which leaves us with one section of the storage unit we haven’t yet put to use — we’re still thinking about that section.

All in all, though, such simple changes and Serendipity has suddenly gotten much easier to live with/in.  It’s amazing how little changes can seem to make a big difference.

When we talked with Brad LaBadie @ Highland Ridge Campground last August about hosting at the campground this coming summer (’16) we had agreed that I’d touch base with him in December to confirm that we were still interested in the summer gig — and to make sure that there were no changes on his end.  I took time to do that Thursday and we are all confirmed for the summer.  We’ll touch base in April to find out their firm opening date.  The campground normally opens May 1, but last year there was a freak April snow storm and they ended up opening a week or two into the month.  By the middle of April they’ll know their opening date and we can head North from Milwaukee at the right time to arrive when needed.

It’s funny how simple things can mean so much; and how easy it is to forget what those simple things mean. We have only had our new refrigerator for 24 hours and yet it has already made it’s presence known in my life (he says as the chief cook). Being able to look in the fridge and see that the freezer is BELOW ZERO and to be able to actually control the refrigerator temps and keep them in a zone we really want them in seems so simple now.  With the NeverCold fridge it was always a bit of guess-and-by-golly. You have to adjust the settings up and down depending on the ambient temps.  They aren’t something you can set and forget.

Also there’s the issue of spoilage.  The old fridge capacity was 12 cu ft unit. We mostly cook fresh ingredients plus protein that we often butcher and freeze.  Normally, there’s a good turnover in the fridge section so spoilage didn’t happen often, but there was no real humidity control so we lost the odd partial head of lettuce and cucumber.  As long as the freezer stayed cold enough to keep the proteins frozen I didn’t worry too much. But there is something infinitely comforting about opening the new fridge door.  When I pick up things,  I feel the right temperature. A lifetime of experience is affirmed on the tips of my fingers every time I touch something. My fingers know that it’s ‘situation normal.’  Our problems with refrigerators were mostly in this coach.  The NeverCold in Journey (our last coach) was never able to keep refrigerables quite the way I preferred.  Overall, I’m much happier now.  (I guess I need more going on in my life if I’m waxing poetic about refrigerators — but that’s the life of an RV’er stuck in one place for too long.)

I mentioned before that we opted not to get the optional (+$99.00) ice maker.  There were reasons for that.

For one thing I was never happy that the water supply in this coach did not run ice maker water through the secondary Everpure water filter.  It’s a Winnebago vs Holiday Rambler difference.  The Journey filtered the ice maker water, Serendipity doesn’t. I don’t like funny tasting ice cubes.

Also, the water lines for the ice maker are an added place for water leaks.  When we installed the new fridge I removed an extra 6’ of vinyl tubing and capped the water line off at the supply.  This way there’s no tubing to leak — as we experienced a few months ago.  When doing the installation we found ample evidence of water leaks earlier in the life of the coach — now there’s no water source.

We still have plastic ice cube trays — we bought them when we had the old coach — I’ll go back to making my own cubes with water from the drinking faucet.  And we don’t use that many cubes.  So, the manual method will give us as many cubes as we need for our lifestyle. 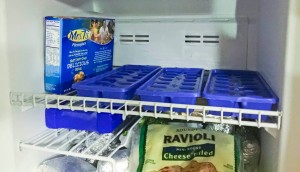 Besides… doing a few things for ourselves isn’t the worst thing in the world.

If you notice there’s an extra full width shelf in the freezer above the 1/2 width shelf that comes with the fridge.  That’s the Closet Concepts shelf that we bought at Home Depot the other day.  It’s 12” deep, just the right depth for the unit.  The shelving came in a 36” width — so all we had to do was to cut the shelving to size; a job made easier because the spacing on the shelving was 1” and the shelf needed to be 18 1/8”.  It works out perfectly.  There’s enough friction so the shelf doesn’t move around, and it’s not so deep that the freezer door won’t close.

Ok — that’s enough for today.  Thanks for stopping by, and let’s talk again tomorrow. With luck we’ll get our meds and be taking about leaving on Saturday.

2 thoughts on “Winding Down”