I may not get things done quickly, but I do eventually get them done.  Poor Peggy waited 5 years after I remodeled the bathroom for me to install the mop boards in one of our houses .  I don’t know why I dawdled for 5 years about installing what took about 1 hour. But it did.  So, by now it should not be surprising that I talk a little, do a little, talk a little, do a little and eventually the job gets done.

With the microwave in place, we looked once more at the backsplash beneath the Microwave and above the stove.  A factory installed mirror lives there now, reflecting light back into the room. The head of our Housekeeping Department, also known as She Who Must Be Obeyed has been talking about replacing that mirror but I think it’s not going to happen.

We had found a peel and stick plastic product that might have been a solution but it wasn’t compelling. 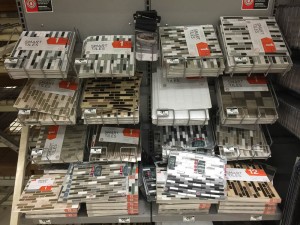 Available in  a variety of different color combinations, and in a 10” x 10” size they looked OK but not compelling.

We found these metal peel and stick tiles made by Aspect and we were a mildly enthused.  There’s no doubt it would make a nice looking backsplash.  Except….  The Holiday Rambler factory did such a good job adhering the mirror to the outside wall of the coach that I don’t really want to risk damaging the outside wall while taking down the mirror.  We finally both agreed that we’re going to leave it just as it is for a while.

Neither of us is actually disappointed.  Yeah — it might have been a nice change but what we have is perfectly workable and cleaning glass is not harder than cleaning the metal tiles would be.  If anything the glass is easier to clean seeing as it is a perfectly smooth surface whereas the metal is a textured surface and I’ll bet my bottom dollar that that texture will be a grease magnet. So, the backsplash stays as it is.

I won’t run out of projects, that’s not a worry.  Besides, what’s wrong with having a little time to just relax and snoop around Wisconsin?

Ok — considering that this is supposed to be time to readjust to new meds we’re still finding little things to think about and evaluate as possible improvements.  Just because we think it, doesn’t mean it’s a good idea.  And deciding which projects NOT to tackle is just as important as tackling others with skill and determination.

Thanks for stopping by and I’ll talk with you tomorrow.