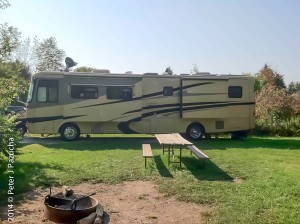 Back to our home site @ Bong Recreation Area… some day I have to learn to pick sites where the table and fire ring are on the correct side of the coach! :-\ 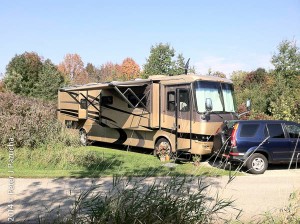 With our large awning out. Does a good job shading that passenger side window!

Our move from Milwaukee to Kansasville was short and uneventful. Just the way we like ’em.  We checked with the desk at the State Fair RV Park about staying just a little behind the checkout deadline,  got an ok, and left about 1 p.m. which got us into Bong an hour before checkin — but our site was already empty, so we just backed in without any excitement — other than our across-the-street neighbor running out to inquire whether we wanted him to move his pickup truck which was parked barely off the road on his side.  Fortunately ours is an easy spot to get into so I backed in while he bit his fingernails. 🙂

We did a little walking around before leaving Milwaukee, taking in the Lake Michigan lakefront where we have spent so many hours pleasantly walking and people watching.

It was nice to be out on such an amazing, warm day at the very end of September.  With temps around 75º there was nothing wrong with THAT day at all!  And seeing the schooner the Denis Sullivan is always a special treat (though with my iPhone I didn’t get a decent shot.)

Too bad I was walking with my iPhone because that’s the SV Denis Sullivan in the background — a three master built by students in the sailing school (if I remember the story right) over about 8 or 9 years. Now it’s available for charters and pleasure cruises during the ‘season.’

The Pavillion at Bradford Beach — I love those old graceful lines. And the planting in the foreground is part of a water-runoff retention pond system from the bluffs above the beach

Autumn is coming, however.  We’ve had temps in the 40’s every once in a while.  At the end of this week (after we are gone) the temps are due to dip into the upper 30’s, but we’ll be out of here by then.  🙂 That said, there are still some colors to be seen.  Maples and Oaks are beginning to do their annual color dance and who can help be amazed at the colors Momma Nature has in store for us this year.

Bu I teased you with hints if information and I must follow through on my promise.

Since switching over to the Sleep Number bed, and then adding the topper (because of my weight and the thinner air chambers in our C-2 bed) we both have been sleeping like babies!  We’re both settling in at a Sleep Number 40 and loving our new bed.

While at Wisconsin State Fair RV Park we had neighbors who were clearly transient workers.  The basic 35 foot 5’er was home to about 6 laborers who left each morning (quietly) about 3:30 and returned to their trailer about 5 each evening.

Finally, just before leaving, we got to discover why they were in town.  It turns out that they are an installation crew for radiation treatment rooms in medical facilities: hospitals, clinics, etc.  The radiation treatment rooms are contained within shielded brick walls & ceiling and they make their living doing the masonry work with 35lb and 45lb special bricks.  HARD, hard, hard work, to be sure.  They have worked all around the country from Florida to Seattle , working several months in each location to finish a new room or two.

Interesting.  I have always been fascinated by the different things that people find to make a living!

Tonight I get to build a fire.  One of these months I need to get another shredder — a little one.  But for now I have about 1 year worth of records and a bunch of checks with the wrong address on them that need to be disposed of.  So, 🙂 time for a barbecue.   Or at least a bonfire!

It’s an odd thing that’s happened.  Leaving the city behind we actually feel freer and more relaxed.  It’s not quite like starting retirement all over again but close.  I think that the tension about whether I really had something wrong with me that needed attention or not had been on my mind and now that we have a good prognosis it seems like we are starting out fresh.

With relief comes new plans.  With our daughter and SIL waffling on when they want to meet up for a visit we are looking at the reality of needing some plan for Winter.  If, as we have been thinking, we intend to be in S. Texas during the Winter it would be advisable to make some arrangements so we can avoid paying the nightly rate wherever we stop — and take advantage of some monthly rates if possible.  I sent out an email to an RV park where we know people,  their answer will help us make plans.  After last winter I’d like some WARMTH.  We avoided the snow in Oregon; but warmth we didn’t find much of (until July in Eugene and then it was HOT).

We have campsite reservations through Oct 12 at this and two Corps parks.  After that we are open.  How quickly we’ll move South, or how slowly will depend (now that we are rethinking our winter)  on whether we find a place to spend several months at, or whether perhaps we decide to bop around between several Corps or other locations over the coldest months.

I do have two short-term destinations in mind.


From there we can mosey over towards Houston, Galveston, and places beyond.   How long we stay there (up to two weeks each) may depend on what we find out in the next few days about long-term wintering options.  So, I’ll keep you posted.

In the meantime I need a haircut!

Thanks for stopping by, and I’ll talk with you tomorrow!

4 thoughts on “A few updates now that we are moved”