Monday we drove into La Crosse to look for sewing ideas.  What?  Since when did Peter start sewing?  But don’t get sidetracked on answers that don’t matter. 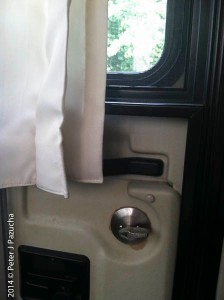 They are also too long over the entry door 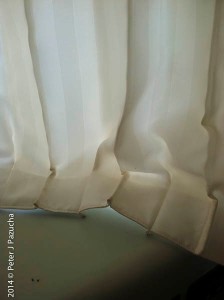 The curtains are too long over the dashboard

The windshield curtains in our coach are worn; they are also way too long for the windows they are installed in; they probably don’t belong in this coach but what can we do about them short of replacing them at this point?

We found some fabric glue to try out. So over the next few days or weeks we’re going to take the three curtain pieces down (one at at time), re-do them, and see if they will survive another couple years.

We thought about asking our daughter to bring her iron along — but I want to find a solution we can use both now and in the future for our sewing needs in the  coach.  We’ll keep you posted on how all this works out.

But, I teased you with “Still Wheels” and haven’t said anything about wheels, have I?

On the way into La Crosse it dawned on me.  We hadn’t been in the car, or in a vehicle with the engine running for 67 hours.  Almost three days and no movement, no ignition, no blast off, nothing!  We got to thinking about our recent history and realized that we haven’t enjoyed that time in one place without interruption since BEFORE we arrived in Oregon!  The entire time in Oregon we were on the move every day, or at the most on an alternate day.  I’m liking this.

While we were with family in Tahoe the husband of Peg’s niece got to talking about his hometown (Viroqua) and the neighboring town of La Crosse!  One of their restaurant suggestions was Buzzard Billy’s — so as long as we were in town, and the temperature was going to be in the 90’s again we decided to eat out and save the cooking heat in the coach.

We had a fun time in this Cajun joint in Wisconsin, featuring seafood, creole cooking and even alligator! 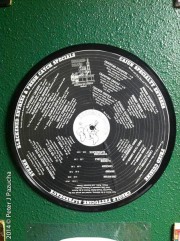 One of their early menus

It was a fun meal!  And the music was great!  We almost didn’t want to leave.

A review of today’s coming week forecast shows that we’re cooling off as of tomorrow.  Rain is a bit iffy — but if we can have some dry time and some cool then I’ll have a chance to get into the basement and pull stuff out, think about it, and see what I can do to rearrange it in a more usable fashion.

Thanks for stopping by, and I’ll talk with you tomorrow.