I’m not a newbie to camping! I’ve been camping since before I was 7

I’m ready to be out of here!  Not because anything special has happened but simply because I’m feeling run down. And yet, we’re still getting little things accomplished.
Right now the accomplishments are more personal than government — which is just fine.

After returning from Junction City a week and half ago we have been keeping the gray water valve closed to see where we would see water FIRST in case the gray water tank filled to overflowing.  In the Journey the Kitchen sink and Shower were  plumbed together — and we always saw water first in the shower — which was a kind of rude experience if you happened to be in the shower at the time you over flowed.  The Ambassador is plumbed differently and we’ve discovered that the Kitchen sink and the Bathroom sink  are plumbed together.  Because the bathroom is at a lower level it would appear that if we wait too long to drain we’ll see water in bathroom first.  That’s a little less annoying than ending up with dirty toes!

So, this weekend one of my projects was to secure my time machines and server to the new traveling shelf.  I don’t know if you’ve seen these little clips —

I found them at Guaranty RV during our last visit. They are designed to hold TV’s in place — so they are quite strong,  my little boxes are quite a bit lighter and being out of sight.  This little product looks like a good way to address my concern that the electronics not crash to the floor during travel.

Our daughter and son-in-law are getting closer to being able to move into their new home.

Before the city would approve their project they had to achieve the standard energy efficiency and the solution was to use some particularly unique commercial windows.  Some 10 weeks later the windows were ready to install and the installers had a fun time changing the exterior and interior aspect of the kid’s new home!

Because these windows are low to the ground and the building sides on an alleyway they opted for frosted surfaces which will give them a huge amount of light — but also obscure the inside from the outside.  Good thinking! 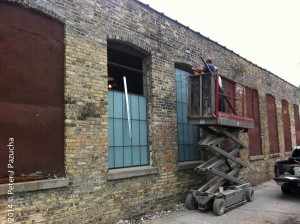 The final improvement I wanted to share is a view of their new shower.  You may remember the large shower we had at our old school.  They didn’t want quite as large a shower as ours but they did want a classy subway tile look and Michael did a whiz-bang job!  I can’t wait to visit to see it in person! 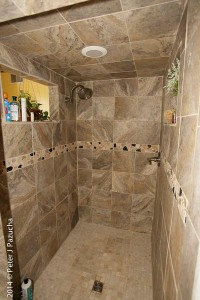 Other than that — we spent Sunday watching the World Cup and just chilling.  I’m really glad we gave ourselves 10 days between leaving the Forest and checking into AM Solar.  I’m going to SLEEP, and we are going to WALK — where it’s flat and hot.  Our only real objective while in town is to see if Peg can find some new jeans that she likes. Other than that we aren’t going to DO much of anything.