We might have found it — the almost perfect RV.

Which doesn’t mean we’ll ever end up owning it, but it’s nice to know it exists.

But first — The State of Wisconsin made a legal eagle out of me on Monday.  I received my license plate stickers for the CR-V that I was short, and as soon as we got home I stuck all of my new stickers on the appropriate plates — on Journey and on the CR-V.  Yay!  I’m legal.

And my Government identity “sponsor” took my email to her about why my credentials were hung up and forwarded it to the guy who told me there was a hangup and asked HIM what was wrong.  Seems I’m the first person she ever sponsored for an identity and she has/had no idea what she was doing.  Well, duh…. considering that it’s more than 3 months now… and we’re still fighting this war…. do ya guess?

I fixed the water system.  Well, I didn’t fix it, but I turned off the pump anyway!  One of our hosts called in to say the water wasn’t running in the campground.  All the staff were missing so Peg and I went exploring and we found the problem — a bad pump that ceased sucking water.  About all WE could do was to turn the pump off so it didn’t burn out — but later in the day Bob got out there and a contractor, and if the contractor gets Bob a quotation by 7:30 this morning the repair should be complete on Wednesday.   Somethings do happen quickly — and they usually have to do with the water system. 🙂

And… we spent half of Monday out talking with Volunteers — doing the other part of our job — for a change.  It was wonderful!

OK — I suppose I owe you an explanation. We still are not looking to BUY a different RV.  But our recent conversations gave rise to some interest in researching whether there even existed an RV with a floor plan that would accommodate the little lessons we have learned in 2 1/2 years of owning Journey.

We conclude there does exist such a beast.

It’s called a 2005 Holiday Rambler Ambassador 40PLQ… and if you are wondering if that 40 means what you think it means– alas, yes it does.  This frigging beast is 40 doggone feet long.  Longer than we ever wanted to be — and probably longer than we ever WILL be.

Yet, it’s fun to dream and so here are the visual details.   I say it that way because I did not investigate whether the engineering part of the RV would meet what I want — but this little project was JUST about aesthetics.  After all it has the ‘wrong’ chassis — a Workhorse, not a Freightliner — but hey, we’re dreaming here and you’ll see why…  This is the only model I’ve seen with one simple feature:

^^^^^^ There it is. Right there at the rear of the coach.  A sitting room with a desk and room for my ‘puters.  No place for my cameras, but there IS room for my ‘puters.  It doesn’t solve the problem of where I go in the middle of the night when I wake up and want to ‘pure, without waking Peggy.  But it’s bigger and comes close. 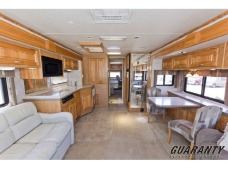 2 sofas and a dining room table

Ok — so we won’t likely ever buy one of these.  But I know that the Coach-of-my-dreams exists.  Isn’t that nice.

Thanks for stopping by, I’ll talk with you tomorrow.

P.S.: Oh — and in the meantime — I might have found a little table I can use to solve my over-the-driver’s-seat computer-table issue.  It folds up, you can use 1/2 at a time — giving me a 31″ x 15″ adjustable height table with legs wide enough to extend across the base of my driver’s seat.  It looks to be a cheap, flimsy, table, made by Coleman, but it might fill my need.  Even if I have to buy and cut a heavier (read that, ‘more durable’) top to the thing — the existing top is only MDF.    The local Camping World is having an open house on April 4, if they have one in stock I’ll check it out.  (actually I ‘ll call first and SEE whether they have one.) 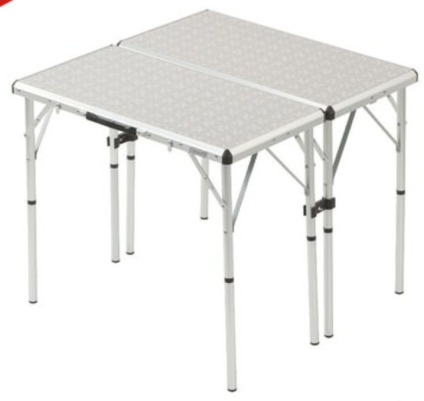 8 thoughts on “The Almost Perfect RV”