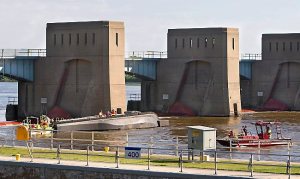 I haven’t had time to write about it, but this has been a sad week along the Mississippi River.  Last year there was too little water, this year there has been too much.  One of the local Barge companies, Brennan Marine recently added a new ship to their fleet, and that brand new tugboat went over a roller gate at the Dresbach Dam, capsizing and drowning one of the crew members, a young 22 year old  deckhand.  The dam is about 25 miles (by road) up the river from us; and the down where the deceased crewman was from is only 6 miles North on Hwy 35 from our campground.

The man had a life jacket on when his body was recovered inside the three-level towboat.  The current was so swift the rescue team had to use a robot to locate the man’s body before they could send a team to make the recovery.  Two other Wisconsin men who were aboard the Megan McB towboat survived with minor injuries.

Winona County authorities say the boat lost power right before it capsized and went through the roller gates at Lock and Dam No. 7 early Wednesday.  The boat was still lodged on its side against the first roller gate Wednesday afternoon.

The Coast Guard will launch a formal investigation, and has closed a six-mile stretch of the river to commercial traffic.  The dam is the same place where 11 people were rescued after a rented houseboat was swept over the roller gates and capsized May 27. In 2007, four drowned at the dam when their boat was sucked back into it.

Since then I’ve not heard much about the situation but it points out that jobs with romantic appeal can be dangerous, and once again it highlights the reality that life is a gift; some of us get to enjoy it longer than others, and it’s not a guarantee that you’ll live a full life and retire to dangle your grandkids on your knee.

Our prayers go out to the family and friends of the young man.

2 thoughts on “Tragedy on the Mississippi”