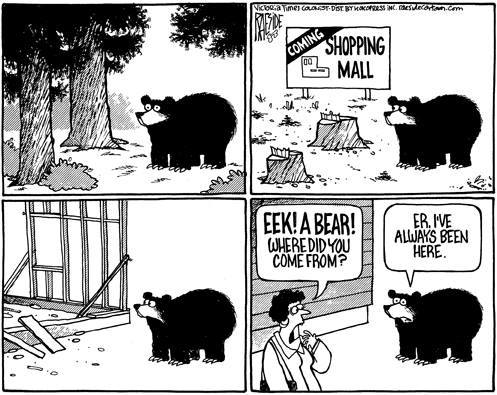 This post is actually an excuse to publish this image.

A fellow blogger over at Notes to Ponder posted about discovering Black Widow spiders in her laundry room. I attempted to comment back and link this image — but Wordpess’s comment system strips out html I guess.   The graphic struck me as poignant because we we formerly lived there were periodic discoveries of wildlife living among humans and a great furor to boot.

Personally, I think it’s the neatest thing in the world to see deer, coyotes, foxes, skunk, and raccoon living among us.  Other people don’t like ’em.  I’d say, it’s a big world and there’s room for all sorts, but the fact of the matter is that we humans are hogging up all the space and making it hard for the critters to get on.  So don’t be surprised when they learn their own adaptive behaviors and appear among us attempting to live a life of co-existence while we humans insist upon exterminating them just like we do other humans.  sigh…..

2 thoughts on “I live here”